Friday, August 15th, 2014 EFA-SST®-PS high-speed spiral door Already uniquely fast, secure and reliable – Now even more has been added to the features of EFAFLEX high-speed doors. Once again, Efaflex engineers have shown why they are at the forefront of product development with the EFA-SST®-PS, a space-saving door particularly suited for parking and garage systems…. END_OF_DOCUMENT_TOKEN_TO_BE_REPLACED

Tuesday, August 5, 2014 CSL Limited officially opened the CSL Behring Biotechnology Manufacturing Facility in Broadmeadows, Melbourne in May 2014 and is gearing up to begin production in August. The facility was officially opened by The Hon. Ian Macfarlane MP, Minister for Industry, The Hon. Denis Napthine MP, Premier of Victoria and The Hon. Gordon Rich-Phillips… END_OF_DOCUMENT_TOKEN_TO_BE_REPLACED 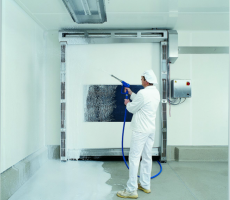 Monday, July 28, 2014 Similar to HACCP in Australia, BLVK is the Federal Association of German Food Inspectors. The independent Federation continues to ensure promotion and development of cooperation with legislation to achieve a practical and consistent implementation of food control and offer consumer advice on topics in the field of food inspection. The BLVK… END_OF_DOCUMENT_TOKEN_TO_BE_REPLACED 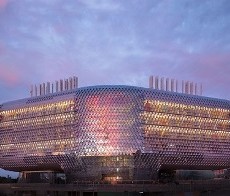 Friday, July 18, 2014 The South Australian Health and Medical Institute (SAHMRI) has been shortlisted at the 2014 INSIDE World Festival of Interiors Awards. The awards this year attracted entries from twenty-eight countries across nine categories. Dortek hygienic door systems were fitted at the new research facility in 2012. The SAHMRI by Woods Bagot is the… END_OF_DOCUMENT_TOKEN_TO_BE_REPLACED 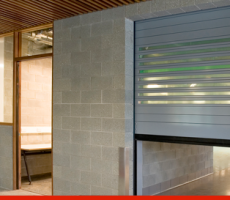 IDEAL SOLUTION FOR ENVIRONMENT CONTROL As seen in Ancr. As you walk into any milk bar or takeaway in Australia, chances are you wrestle your way through a plastic strip curtain. Marcus Tutty’s company Premier Doors manufactures those multi-coloured strip doors on Australian shores, and the managing director is the first to admit “they drive… END_OF_DOCUMENT_TOKEN_TO_BE_REPLACED 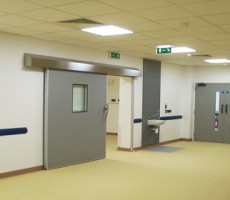 Monday, January 6, 2014 Hospitals across the world are creating a new breed of surgery spaces called hybrid operating rooms. Hybrid operating theatres combine the surgical capacity of traditional operating rooms with the imaging capabilities of a catheterisation lab, two spaces that have traditionally been extinct. Placing state-of-the-art imaging and X-ray equipment in an operating… END_OF_DOCUMENT_TOKEN_TO_BE_REPLACED

Check out the doors in ACTION